A Word on Gratitude 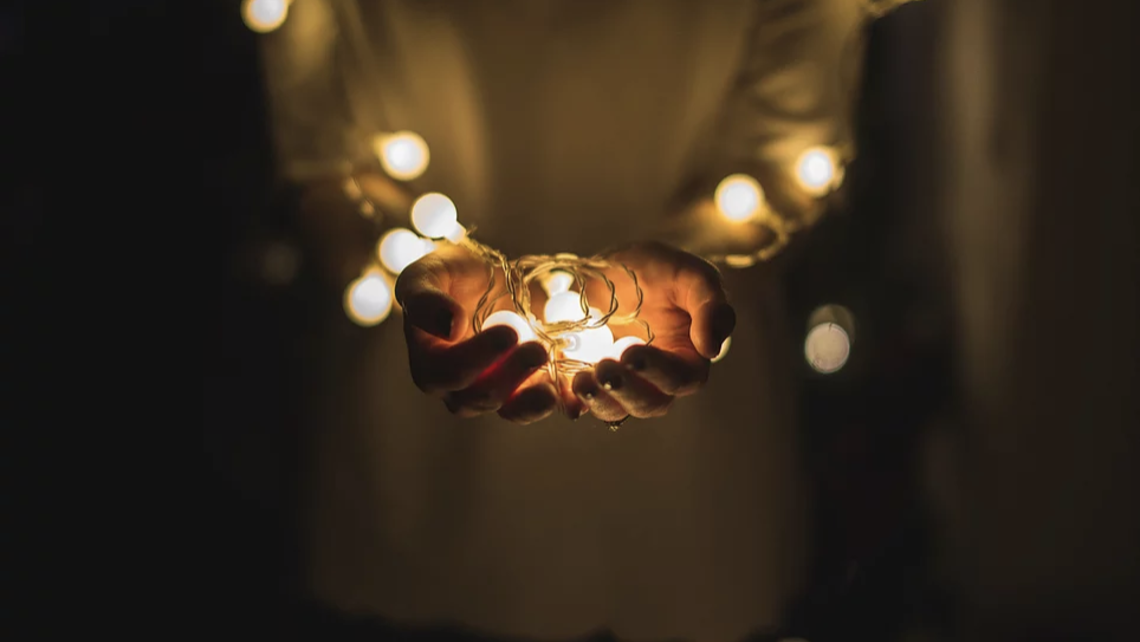 Learning to live the meaning of life

We're headed into time of the Birth of Christ and it can be a crazy time. It is supposed to be a time of reflecting back on all the gifts that have been given to us, spending time with family and friends, reminiscing on years gone by. Yet for some of us, this time of Advent is anything but wonderful. There’s painful memories from more than a couple of occasions that can keep us locked up inside, afraid to engage life.

I’ve seen this with countless clients of Freedom Coaching who have a compulsion to pornography. Instead of responding in healthy ways to uncomfortable emotions, they try to bury the pain by indulging pornified images, frequently, which leads to a vicious cycle of self-abuse. Countless men and increasing numbers of women can’t seem to be break free, and the guilt and shame is crippling.

This doesn’t have to be the cross we carry for the rest of our lives. There is way out. And the secret lies in delving into the Scriptures.

Lost in the Desert

Turning to the Book of Numbers (21: 4-9), after the Israelites were freed from slavery, we see they were happy and fulfilled….for about 3 days. Their new life became very real to them, where the were out of their comfort zone. They were lacking their so-thought plush accommodations of Egypt and they weren’t happy about it. When life became hard, they ceased being the plucky-go-lucky group that God chose for some mysterious reason and instead became a bunch of whiners (maybe they already were whiners, but I’m trying to give them the benefit of the doubt).

Prior to this, something remarkable had happened: After about 400 years of slavery, God showed up big time, parted the Red Sea – like a man parts his hair – and they were sent on their way with a “cloud by day and fire by night” (Ex. 13:21).

Apparently, His providential care wasn’t enough. The last straw for them was this “Wretched Food!” It wasn’t filet minion or lobster, but it was exactly what they needed. When the pressure was on, the Israelites buckled, rejected this divine gift, and they demanded to be put back into slavery – “at least we’ll be comfortable!”

That was the last straw. What the Israelites had done was spat in the face of God. How so? Because He had given them “Bread from Heaven.” Their reaction was the equivalent of a banquet meticulously being prepared for them, with all the most succulent meats, cheeses, wines, and other assortment of delicious foods, and upon tasting one bite, they threw it up and demanded a bowl of corn flakes.

If you were the one to prepare the feast, you’d be ticked off, too. God’s children were exceedingly ungrateful, and as a good Father, he needed to discipline them.

As a punishment, snakes were sent into their camp. For a the Israelites, this was more than just a physical threat; this was a threat as old as the beginning of time. Looking back to the book of Genesis, Adam and Eve were put into the garden of their dreams. However, standing between their happiness was Evil in the form of a serpent. As the story goes, they both made a fatal choice. And like all choices, there are consequences. Their consequence was quite fatal, and it affected has all of us.

Amongst the sentences God handed out, God said to the Serpent:

“Because you have done this,
cursed are you above all cattle,
and above all wild animals;
upon your belly you shall go,
and dust you shall eat
all the days of your life.”

I’m not sure exactly what snakes looked like before this, but clearly they were humbled to be the lowest of all the creatures. And what the snake was cursed to eat surely sent a shiver down Adam and Eve’s spine.

Why? Because Adam and Eve were made from dust. It is the breath of God – the Holy Spirit – that separates them from every creature. They were created to be holy – set apart – from all of creation. This difference is what makes them special, for they had the life of God that sustained them into existence.

When Adam & Eve sinned, although they didn’t physically die at that moment, Adam & Eve did die, for they breathed out the breath of God – they “ex-pired.” And because they didn’t have this breath, they returned back to dust, becoming “snake food.”

Let’s connect this to our subject at hand: When we forget about the blessings God has given to us, we become ungrateful. We become subject to temptation and put ourselves in a position to be taken down by the Evil One. As many of us know, due to our drug of choice, we become wrapped up in guilt and shame, and the darkness is stunningly alienating.

For the Israelites, they became physical snake food, where the snakes bit them. Some of them even died. As all whiners do when their situation becomes intolerable, they cried out, to God and to Moses, to save them.

Healing comes from the unexpected

When we think of healing from a snakebite, some of us would turn to maybe a salve or an herb. God knows any antidote must get to heart of the problem. For the Israelites, their problem was their hearts.

You see, God is not interested in mere platitudes, of just good words or actions, but as St. Paul makes clear in 1st Corinthians 13, all the things we may do are just noise compared to the intimacy He wants from us. He pants for our love. He is a wounded lover who doesn’t want revenge, but desires to come into us and to be made One. This oneness begins with the heart, for without the heart, there can never be real unity.

The Israelites were not really free. Yes, they had been set free from physical slavery, but their hearts’ were still in Egypt. This was physically represented by the clothing and gold the Egyptians gave to them as they departed (Ex. 12:35). They were attached to Egypt – exteriorly and interiorly – and when Somebody moved their cheese – if you don’t know this story, go look it up – instead of finding a way, they got lost in their complaints.

And so it is with us. While material things can be a blessing, we have a tendency to become too attached to the things of this world. I know this all to well in my life. I like things a particular way. I like getting up early to hear the quiet of the house so I can pray and workout. I like to go to bed and get my 7 hours of sleep. I like when I hit every green light and for WAZE to work exactly as it should. I like when my wife responds to my desire for intercourse with her. I like having my cell phone near me and my Macbook Pro function flawlessly.

But sometimes I lose my cool. The kids get up way too freakin’ early – especially on weekends, derailing MY plans. A 30 minute drive turns into a 45 minute slog, due to people not knowing how to drive (or so I think). My wife wants to talk about something important to her in the late hours of the night, or the arguments we engage in put a major damper on the mood. Sometimes I can’t find my phone and my computer just stops working for some unexplained reason.

I don’t know about you, but I’m constantly being challenged by my priorities and perspectives, and when things don’t go the way I want them to, I have a tendency to lose my gratitude. And then I hear the chomping of the snake somewhere in my soul. <SHUDDER>

For the Israelites, what’s fascinating is how God got to their hearts. For he didn’t just want them removed from physical slavery, but to have ALL OF THEM. He is a jealous lover, the Divine Bridegroom, and He wanted the core of who they are – their hearts.

This is intimately tied into how the Israelites got healed from the invasion of the serpents: By Moses having a Bronze serpent cast in fire, and then having to look at it. Why? Because the eyes are the windows to their soul – and hearts – and they needed to see clearly what their offense was – ingratitude – as well as the seriousness of their actions.

All of this gives rich context to the New Testament conversation that Jesus has with Nicodemus, which culminates with the famous passage John 3:16:

There are lots of problems in life that will arise inevitably – “In the world you have tribulation; but be of good cheer, I have overcome the world” (Jn. 16.33) – but we must have confidence that God is with us – Emmanuel. This is what we pine for – or should – this time of year, when it is most dark, we must let this light of hope shine forth, because we have the greatest reason ever: Love has come in the flesh to redeem our flesh so we may live His Love in and through our flesh.

If the Source and Summit of our Faith is the Eucharist (Catechism #1324), and the Eucharist directly translates as “Thanksgiving,” and we are what we eat, they it is imperative that we live an attitude of gratitude. More so, we must become gratitude.

So how do you do this? As I mentioned here, In order for a habit to be formed, it takes between 21-40 days for it to take root. Thus, make a list of 100 “things” – persons, places, things, events – that you are truly thankful for. Start each phrase with “I am thankful for...” or “I am grateful for...” Make sure that there is emotion attached to each one. Then, for the next month, read it out loud everyday, soon after you wake up (gratitude is a great way to start the day, and it will begin to form new neural pathways in the brain, informing yourself that gratitude is the new normal. Your spouse and your co-workers will thank you for this.

When we’re living gratitude, we’re able to see clearly what things are and what they are not, realizing that the problems we experience in life are just that – little. We will remember that God is with us and that He is working all things out to our good. In addition, our mind will also start working on finding an answer to our problem, because it’s not taking up the mental energy of those uncomfortable emotions.

As a natural outflow of this gratitude, when we are feeling upset, anxious, sad, or any other uncomfortable emotion, because we’ve formed a new habit, we can stop and say five things that we are grateful for. This will help us to remember the little things. In turn, we’ll be able to keep focused on what is good and beautiful, and work to bring this forth to the world.

When you hear the word “freedom,” what do you hear? For many of us who have grown up in the... END_OF_DOCUMENT_TOKEN_TO_BE_REPLACED

I remember you as that 18 year old girl. I thought I knew what love was, what... END_OF_DOCUMENT_TOKEN_TO_BE_REPLACED

We humans are ironic creatures. We fear change, yet we crave change. We hate goodbyes, but we love new beginnings. This paradox runs deep... END_OF_DOCUMENT_TOKEN_TO_BE_REPLACED